After being on two other NIDs (one in Africa, the other in India), Pakistan was somewhat different. I was able to visit the training sessions that were taking place for the women who were going to go out into the villages and do the Polio drops. The three (3) training sites totaled about 80-100 (mostly WHO women) due to the fact that mothers did not approve of men handling/giving the drops to their children. As I went out into the villages, the volunteers would hold the children and I would then give the drops. I was also able to visit a clinic where there were two lady Docs who told me they see about 50-60 lady patients a day for any and all needs. Bad part is that they only have a few drugs to provide to those that need them.

In the back of the clinic, there more WHO women who were mapping out the area that was to be covered in that part of the village. I also was able to team up with more WHO people (this time young men) at the train stations, and when the train came in we would jump on the train and walk down the aisle looking for children that didn’t have their little finger painted purple. It was here that I had my first refusal from a mom that said NO to the drops. We could not change her mind (this was hard for me, to think that this child may be carrying the virus into this area). 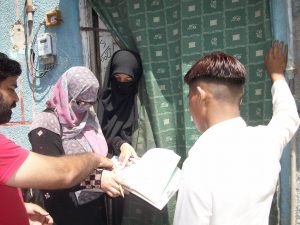 We also were able to visit a military roadblock for all incoming buses (into this district) where the driver had to show the guards some paper work. We would jump into the bus and again walk down the aisle looking for children that didn’t have their finger painted……..my second refusal……by the mom (again very hard for me).

So, I am concerned/worry as to how many children we are missing and/or are being rejected by the moms that our fight to end this virus might be never ending. (Africa may raise its ugly head here in Pakistan in the future). I was on the ground for 13 days, and was told that Afghanistan is not doing the good job that Pakistan is doing on our fight to end this disease. 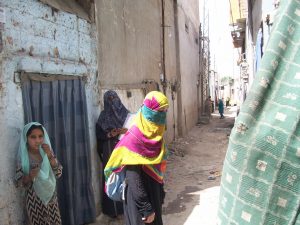 This last hurdle is going to be tuff, and I now know more than ever, after being on the ground there, that we cannot let our guard down.

ED NOTE: Pancho was featured on the cover of the April 2017 edition of the Pakistan National PolioPlus Newsletter.  In addition to the photo at the beginning of the article, a very nice caption:

PAG/PP Cecil (Pancho) Padilla from the Rotary Club of Winters – Northern CA USA (District 5160), current polio chair, has traveled to 76 countries to work for Rotary.  A Rotarian for 45 years and an AKS member for 10 years, Rtn Cecil was in Karachi, Pakistan for a week to participate in the April NIDs.   Thank you Pancho!