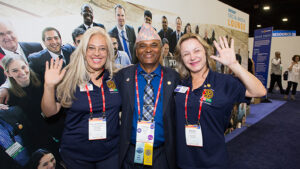 Since 1910, the Rotary convention has combined fellowship with Rotary business and inspired attendees with notable guest speakers and entertainers, workshops, and messages from Rotary leaders.

On 15 August 1910, Paul Harris convened the first Rotary convention. At the time, there were 16 clubs in the United States. They shared the Rotary name and had similar objectives, but no central office or constitution.

“This is going to be a convention in which we will get down to business and endeavor to launch the National Association of Rotary Clubs. We need the best thought and cooperation of every single man who is here,” Harris told the 60 registrants assembled at the Congress Hotel in Chicago. “We are going to try and have a good time as we go along, that is, we are going to intersperse enough good time so that you will not remember it as a sad occasion; but nevertheless, the primary purpose of this convention is to transact business.”

In Rotary’s early years, the convention delegates debated and voted on changes to Rotary’s Constitution and Bylaws. As membership and convention attendance grew, this process evolved, and in 1977, the Council on Legislation became Rotary’s legislative body. The convention remained the main event for meeting friends, celebrating accomplishments, and discussing the future of Rotary.