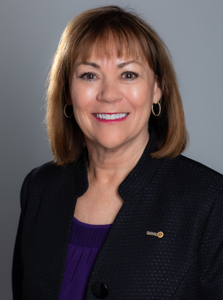 Her most impactful experiences in Rotary are those involving youth: Rotary Youth Leadership Awards (RYLA), co-creation of a leadership program for 12–13-year-olds, Rotary Youth Exchange, and introduction of experiential team building processes to a RYLA camp in Benin, Africa.

Vicki and her husband Tim participated in a National Immunization Day in northern India in 2009. Giving those two precious drops to a 2-year-old child at a train station in Moradabad and other life changing experiences of the NID made polio eradication very personal to them both.

Vicki graduated from the University of Utah with a Marketing degree and Master of Business Administration and went on to own a commercial electrical contracting firm in northern Nevada for 19 years before merging it into a public traded entity.

Vicki and Tim live in Reno, Nevada, at the base of the Sierra Nevada Mountains. Their blended family includes seven adult children, nine grandchildren, and three Rotary Youth Exchange daughters. Their interests include outdoor activities and general aviation. Vicki and Pilot Tim are members of the International Fellowship of Flying Rotarians. They support Our Rotary Foundation as Major Donors and members of the Paul Harris Society, Polio Plus Society, and the Bequest Society.