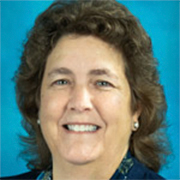 Deb joined the Rotary Club of San Luis Obispo in 2003. She served as Club President in 2012-13, and in many district positions before being selected to serve as District 5240 Governor for 2020-2021. Deb is a native Californian, raised in Sunnyvale. She made her career in Law Enforcement, beginning with the Santa Barbara County Sheriff’s Department as a Deputy Sheriff at the age of 22. During her 18-year tenure at the Sheriff’s Department, Deb served in a variety of assignments including patrol, narcotics detective, major crimes investigations, sergeant, lieutenant, and commander.

She was hired by the City of San Luis Obispo as Chief of Police on January 1, 2003 and retired from law enforcement in December 2011 after serving nine years as police chief. Deb is now an instructor and training coordinator for various organizations, including the California Police Chiefs Association and the Centre for Organization Effectiveness.

Deb holds a Bachelor of Arts degree in Sociology from U.C. Santa Barbara and a Master of Arts degree in Leadership from St. Mary’s College in Moraga. She has been married to her wonderful husband Bill for 25 years and they enjoy two adult sons, a six-year-old grandson, and a 3-year-old Boxer named Kona.